THE BEST BALLS IN TOWN

Founded in 1982, Amir’s Falafel was the first LA eatery in the San Fernando Valley to sell the Mediterranean favorite: the falafel. Over the last 40 years we have perfected our recipes and have grown a sizable following who keep coming back for our unique take on Mediterranean cuisine.

The origins of our recipes start in 1920’s Jerusalem, where Naomi Amir perfected her falafel recipe and opened a restaurant with her husband, Chaim. The couple had a son, Yehuda, who began working in the restaurant at age six, standing on a stool to take orders.

Today, her great-grandson serves the same traditional Middle Eastern cuisine—now in Los Angeles. Bold lamb shawarma twists on the rotisserie, waiting to be sliced and piled high on a plate with hummus and salads. And of course, the falafel, made the same way Naomi used to make back in Jerusalem.

Our original family recipes have traveled generations, and continents so you can enjoy a fully authentic Mediterranean meal.

We use only the best and freshest ingredients, carefully sourced from local growers and purveyors.

Family is at the heart of every single recipe we offer. Created by our family, to be enjoyed by you and your chosen family.

1929
Chaim and Naomi Amir emigrate from Yemen to Jerusalem

After Chaim’s employer shut its doors, in desperate need of a new stream of income, the couple turned to selling Naomi’s falafel sandwiches at the local market from a push cart.

Together, using Naomi’s recipe, they opened a brick and mortar restaurant where their children helped sell their signature falafel sandwich, making it one of the first and most popular falafel restaurants in the region.

1973
Yehuda, 5th son of Chaim and Naomi, open his own restaurants

Yehuda sets off to open one restaurant in the center of Be’er Sheva, and later that year, opens a second location in Dimona.

In Los Angeles, they open a burger joint on the corner of Ventura Place and Ventura Boulevard. No one had heard of falafel yet, so they introduced it as a side dish at first. Soon, customers were coming for the falafel instead of the burgers. 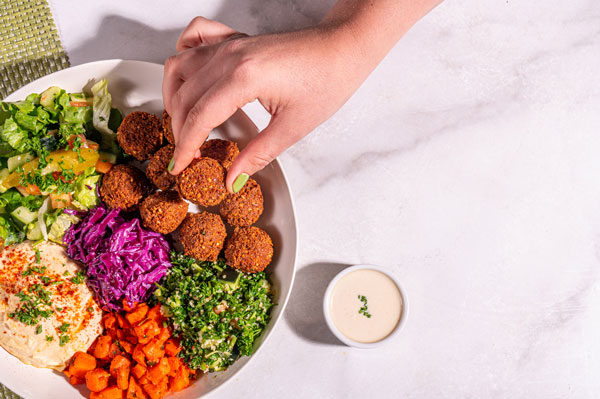 Convenience and health are currently the two most important factors for a majority of customers. Amir’s Falafel perfectly combines these two with deliciously authentic middle eastern cooking.

Join the Amir’s Falafel family, and bring delicious Mediterranean cuisine to your community!

(And a regular dose of mouthwatering food pics)

Manage Privacy Settings
To provide the best experience, we use technologies like cookies to anonymously analyze visitor behavior. Accepting will allow us to anonymously analyze data such as browsing behavior. Not consenting or withdrawing consent, may adversely affect our ability to improve the website experience.
Manage options Manage services Manage vendors Read more about these purposes
View preferences
{title} {title} {title}
Order Online