1929
Chaim and Naomi Amir emigrate from Yemen to Jerusalem

Shortly after arriving, Chaim landed a respectable position managing a tile manufacturing plant until the company was forced to shut its doors. With the weight of his family on his shoulders, Chaim struggled with the challenges brought by unemployment.

One day, Naomi was taught by her neighbor the recipe for Egyptian falafel. She modified it to her taste, making the falafel from garbanzo beans instead of fava beans, and added her own combination of spices to the mix.

As times grew tough, she proposed the idea of selling falafel at the local marketplace to her husband. Naomi prepared the falafel at home, filling the pita bread with nothing but tahina, hot sauce, and pickles, and sent Chaim to the local market. Within hours, he sold all the falafel sandwiches. The following day she doubled his inventory and, yet again, he returned home without any leftovers. This continued until one day contractors began to construct a building where Chaim used to sell his sandwiches. Naomi, who by that time had saved enough money from the falafel sales, contacted the landlord and purchased space in the building.

In 1939, Chaim and Naomi opened a falafel restaurant where their children helped sell their signature falafel sandwich. As one of the first falafel restaurants in the area, it developed quite a following in the region. 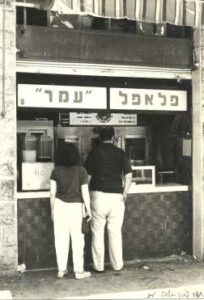 A year prior, Naomi gave birth to her fifth child, Yehuda. Yehuda began working at the restaurant at the age of 6, standing on a stool to take orders. Yehuda would finish school and rush to the restaurant to lend a hand to his father and siblings. Yehuda continued to work there as he grew older, learning more about the food service industry with every shift.

1965
Yehuda and Frida open his own restaurant

At the age of 22, Yehuda marries Frida and they move to southern Israel to a city called Be'er Sheva. He decides to open a falafel restaurant of his own in the center of the city. Yehuda and his wife work from morning to night six days a week, running the restaurant themselves.

By the end of 1973, Yehuda opens a second store in Dimona, a city not too far from Be’er Sheva.

In 1978, Yehuda and Frida visit Los Angeles and immediately fall in love with the city. Seeing the opportunity in the untapped market, they move to Los Angeles with the goal of introducing the years-old falafel recipe to the American market.

In June 1982, Yehuda and Frida move with their 3 children to Los Angeles. By August, they open a restaurant on the corner of Ventura Place and Ventura Boulevard.

Nobody knew what falafel was at that time, so they sold burgers and fries and slowly introduced falafel to their customers. Customers began falling in love with this foreign dish, eventually coming for the falafel instead of the burgers. They operated in that location until the property they were renting was sold.

The restaurant is moved to the Sherman Oaks Galleria when the property they rented was sold. 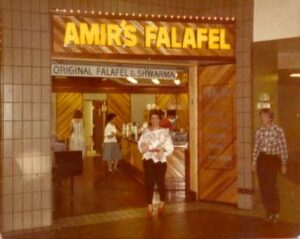 To satisfy popular demand, they opened a second location on the corner of Ventura Boulevard and Colfax Avenue. During the course of his life, Yehuda transformed the restaurant from a mere fast-casual eatery to a place where customers call home.

Our unwavering dedication to our customers and their continued loyalty is what keeps us going to this day. We are blessed to be part of this wonderful community and supported over these many years.

In 2022, we completed a rebrand (and soon a remodel) of our original location. We're so happy to continue serving the same fresh flavors and recipes you've come to love.

(And a regular dose of mouthwatering food pics)

Manage Privacy Settings
To provide the best experience, we use technologies like cookies to anonymously analyze visitor behavior. Accepting will allow us to anonymously analyze data such as browsing behavior. Not consenting or withdrawing consent, may adversely affect our ability to improve the website experience.
Manage options Manage services Manage vendors Read more about these purposes
View preferences
{title} {title} {title}